Welcome to the
Treasure Chest 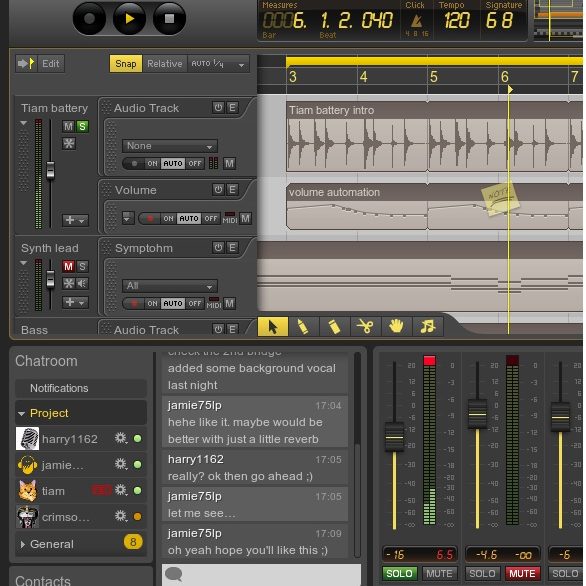 Ohm Force has made many FX and instruments yet from day one our goal has always been to create the first real time collaborative Digital Audio Workstation. While the dream started in 1999, the code started in 2007 and the release of Ohm Studio happened in 2013. Since then Ohm Studio has been the virtual studio for hundred of thousands of users and projects.

Ohm Studio is also, to this day, the only non text related, desktop based, real time collaborative editor.

That's right. There aren't any equivalent in video editing, audio editing, 3D editing, etc. Actually, save for Microsoft Word, and the (to this day only announced) next update of iWork, each and every collaborative app is web based. And an overwhelming majority are text editors.

The reason is that continuous collaborative editing is a very challenging technical question. The most used approach is called Operational Transformation, is indeed text-centric and all framework using it are based on javascript. A second approach called CRDT is also text centric, also mostly based on javascript and even less suited for the needs of all those desktop based editing software.

This category is essential because those are the tools actually used to shape the world. A desktop computer with its large screen, keyboard and mouse is a tool scaled for complexity, which is essential to make streamlined end products - the one that accumulated to become your daily environment. This implies in turn biggest collaborative editing related challenges than what you find in simpler apps or even games. CAD, PLM, Game creation, Video editing would all heavily benefit from that holy grail of collaborative feature. And were 10 years after Google Doc demonstrated how much potential for business and users a real time collaborative editing ability can bring. This is a telling sign of how much of a blocker that feature can be.

How did we solved it then ? As far as we can tell, through an unusual commitment to get it to work (check how long it took), some creative lateral thinking based on solid maths... and according to our CTO Raphaël Dingé: "a hefty dose of luck". Thinking out of the box of Operational Transformation and CRDT, we found a very different approach with a strong focus on implementation. After all we're developers with some research abilities rather than opposite. And it just works. Flip has been field tested in production with nearly no bug. It's been integrated by developers with code more than a decade old. It's been understood and used within a few days on new projects. Each and every time, it's been an accelerator rather than a piece of work for the people adopting it.

We quickly realized from private demand there was a strong need for our solution so we created sister company Irisate, packaged the technology and are currently licensing it and making it evolve in production with our partners.

Flip is happily used by large teams, small ones and academics. If you want to know more -how does it work, what does it need, how much it costs etc.- the link to click is irisate's website. See you there!